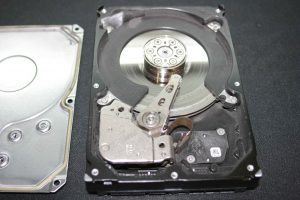 Seagate 1Tb following a head crash and prolonged attempts to access it.

The above picture is from a Seagate 1Tb which came into lab for data recovery, the client is a hosting company, the failure a severe head crash.

Platter damage is very evident in the photo, the scoring to the disk surface and ‘data dust’ can be clearly seen, the filter which is at the top left of the image also shows the severity.

Following a weekend outage of data for the end user the data center engineers checked the rack this disk was located at.

It could clearly be heard clicking.

Left running over the weekend with power cycling in an attempt to make the drive come ready failed. 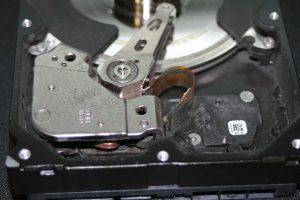 A closer view of the state of the disk

This next image is closer and you can see the damage to the platters even clearer, the outer edge of the platters carry vital data called SA, this is destroyed for this copy, this model is a Seagate, most hard drives have SA in the same position. 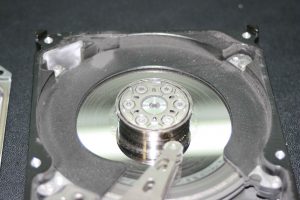 All the above photos were taken inside our clean room environment, it is advised that you never open a failed disk in normal conditions as you could well end up with a hard drive in a similar condition as above, because dust and other contaminant could enter the disk and re powered it would cause this hind of failure.

Suffice to say this drive was completely unrecoverable, and here is why.

As explained previously most hard drives have an SA or system area, this is the firmware of the storage media and contains vital code to control the disk geometry, tracks and handle bad sectors, if it is lost the disk can not be operated again.

Although certain models and brands  have back copies of the SA, this disk had suffered from multiple surface failure, in other words all the platters were damaged from the head crash, no copies were available.

So, in extreme in advanced data recovery the drive would be cleaned the heads would be replaced, and in some instances certain heads would be switched off to avoid damaging the new heads, this is called head mapping.

If a good copy of the SA could be located and any damaged modules within the SA repaired the disk came ready then a clone could be made, that is to say all good available sectors would be read out including on different passes UN sectors with an ECC read algo.

Of course because there may be heads off and many bad or unreadable segments to the drive, this would leave logical damage, i.e file tables, MFT, B-tree or catalogues nodes could be missing leaving RAW data recovered, so the user would end up with a bunch of file types to sort through .

Further to this the actual files would also be damaged, as the data is spread across the drive with sectors ranging from 512 byte to 4096 byte sectors, so a .jpg as an example which may be 4mb in size will be stored across several sectors and if now they are destroyed that image will be broken not function or result in a faulty image.

This situation is worse when looking at video type data which is usually bigger in size over many areas of the drive, and will result in a video which may start then stop, jump or display lines or ’empty’ data, please also note that this hard drive is 1Tb and has some nearly 2 billion sectors that will need to be cloned.

Our engineers have seen and recovered many Seagate hard drive head crash cases, and using the best tools and techniques are able to recover data where other companies have given up or declared the drive unrecoverable, if you want a second opinion for storage device contact us today.

Another important point is the time frame, our services range from standard 5-7 days to emergency same day, because of failures such as this you can see how this would impact in the turnaround of this hard drive case, location of the heads usually from the USA, then the cloning time, which may be many days to a week or more, please also note that although this case was for a Seagate 1Tb, this failure can and does occur to all manufactures.