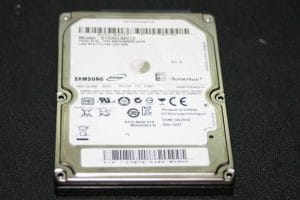 A very distraught end user contacted the team recently regarding a data loss issue they were experiencing with a dropped Samsung 500GB hard drive.
The disk contained all backups going back over 10 years, data such as pictures, documents and music were stored on the media.
A very recent computer failure prior to this incident made the recovery more important, as all the information had been backed up from the failed laptop computer to the now failed disk.

Further discussions followed with the client who informed engineers that it was powered back on following the fall to the floor, where a small beeping noise could be heard.
Never re power your disk following a drop or physical failure, the heads will come directly into contact with the disk surfaces or platters and cause more damage.

Following our booking in procedure the damaged media was taken straight to our clean room environment and opened. 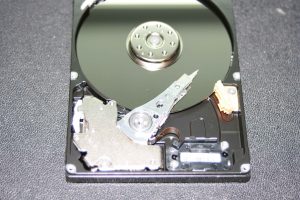 Opened Samsung 500GB for inspection following the accident where client dropped the disk to the floor while it was powered on.

The above picture shows the current state after opening it in our clean environment, the HSA or head stack assembly can be seen ‘parked’ in the wrong position, i.e directly on the platters, hence when the client powered on the disk a beeping noise could be heard, as the spindle motor attempted to spin the drive but was unable to.

A close examination was made of the disk surface which looked to be in good condition, the yellow component to right of the heads is called the ramp or sliders, this is where the heads should remain while the disk is powered off.

To the lower left of the photo is the top part of the VCM or voice coil motor, this is a permanent magnet and is part the HSA driver circuit. 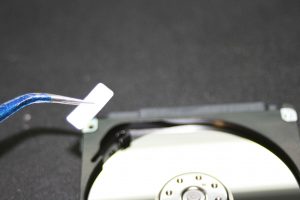 This picture shows the filter, which is clean, this is a good indication of the state of the platters, dropped drives which are powered on again and do not have stiction can cause significant damage to the surface.

Completing the clean room work would be to replace the heads in this Samsung ST500LM012, this is a very strict procedure requiring the location of correct donor heads, which must match the model, part number, head map and date codes, anything less than this criteria could result in the heads being rejected by the drive.

Firmware analysis and backup showed that the SMART required clearing, along with work to the A, S and T list modules which control the bad blocks and tracks of the HDD.

Finally the drive was cloned 100% using special hardware and software systems, once completed the operating system could be located which was Windows %MFT master file table and scanned to reveal the complete data set.

This page is not intended as a tutorial on how to recover a hard drive, it is intended to show our skill set and capability, there are various stages , techniques and equipment not shown here for IP and potential data integrity for potential data loss situations.